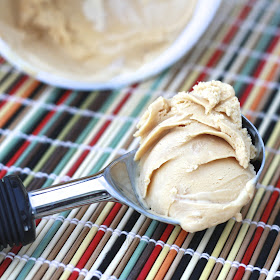 You know a book is well loved when you see dog-eared pages, a worn cover, and a softness that books fresh from Barnes and Noble lack. My copy of A Tree Grows in Brooklyn fits this definition. An avid reader, I rarely reread books, mostly because there are still so many books left out there for me to read. A Tree Grows in Brooklyn is different though. It’s one of the few books I return to again and again, whenever I’ve seeking a familiar story or an escape into Brooklyn in the 1940s.

My cookbook collection remains rather intact. I try to keep them neat and clean which isn’t difficult because, much as I hate to admit it, I don’t pull them out as often as I like. With an endless supply of recipes on the internet and the pages of my many magazines delivered each month, I sometimes forget about the cookbook collection I’ve started to grow. However, I can already tell that Jeni’s Homemade Ice Creams has a different future in store. I’m even hesitant to place this cookbook on my shelf because I am so frequently pulling it out and paging through it in search of my next ice cream recipe. I recently shared my Coconut Rum Ice Cream with you, and this Salty Caramel ice cream was the next masterpiece to come from Jeni’s book. 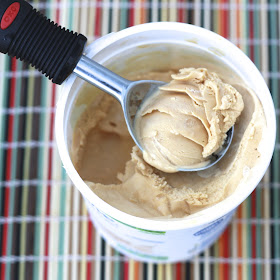 This was my first attempt at burning sugar to make caramel and though slightly terrifying, Jeni’s instructions were clear and to the point. I followed them exactly and had no issues, save for my caramel starting to crystallize a bit when I added the dairy (it later melted again as I continued through the steps!). I’m loving that Jeni’s ice cream method produces a rich ice cream base despite the lack of eggs in the ingredient list.

The ice cream was undoubtedly salted, though I think I had a heavier hand with the salt than called for. I just can’t seem to get enough of the salty-sweet combination (see: sweet and salty brownies!). Both Ryan and my friend Kacey immediately commented on the strong toffee flavor—think Heath bar, but without the chocolate. Much like the Coconut Rum Ice Cream, this didn’t last long in our freezer! Though we finished it off by itself, I think it would pair nicely with a warm brownie!

Directions:
1. In a small bowl, mix 2 tbsp milk with cornstarch to make a smooth slurry. Set aside. In a separate (medium) bowl, whisk cream cheese and salt until smooth. In a measuring cup with a spout, mix the cream with the corn syrup. Fill a large bowl with ice and water.
2. Heat the sugar in a 4-quart saucepan over medium heat until melted and golden amber in color (to do this effectively, add the sugar and then don't touch with a spatula until there is a full layer of melted and browning liquid sugar on the bottom with a small layer of unmelted white sugar on top. When the melted sugar edges start to darken, use the spatula to push the edges to the center to help everything finish melting. When little bubbles begin to explode with dark smoke and it is the color of an old penny, wait one moment and then remove from heat.)
3. Once caramel is removed from heat, stir constantly and add a bit of the cream/corn syrup mixture to the caramel (beware--it will fizzle and pop!).  Keep adding the cream a little bit at a time until it is all incorporated.
4. Return the pan to medium-high heat and add the milk. Bring mixture to a rolling boil and boil for 4 minutes. Remove from heat and whisk in the cornstarch slurry.
5. Bring the mixture back to a boil over medium-high and cook for 1 minute until slightly thickened, stirring with a heatproof spatula. Remove from heat.
6. Pour the mixture into the cream cheese until smooth. Pour the hot mixture into a gallon-sized Ziploc bag and seal before submerging in the bowl of ice and water. Allow to stand, adding more ice if necessary, for 30 minutes or until cold.
7. Pour liquid into ice cream maker and churn according to manufacturer instructions. Pack ice cream into storage container, press a piece of parchment paper directly against the surface, and seal with an airtight lid. Freeze until firm, at least 4 hours.
Natalie at 4:06 AM
Share
‹
›
Home
View web version